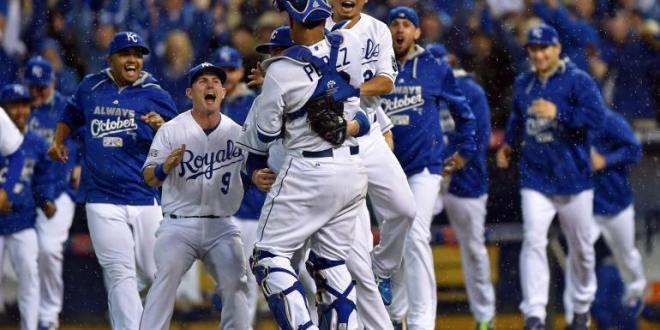 If there is one true fact about sports. It’s the fact that everyone loves an underdog. This is the main reason why everyone loved the movie “Rudy”. The scene where every player tells the coach that Rudy can have their spot on the team is one of sports moves best scene. And this year in the ALCS we find our Cinderella, underdog team in The Kansas City Royals. They are a team no one had making the playoffs. They shocked everyone when they beat Jon Lester in the Wild Card playoff game, especially after being down by 4 runs going into the 8th inning. That was the first time this feat had ever been achieved in a winner take all game in MLB postseason history. They kept on shocking the world as they swept the Angeles in the ALDS. The Angels were the favorites to make it to the ALCS and possibly win the World Series. The Angeles had the best record in all of baseball but they ran into one of the hottest teams in the Royals who just bum rushed them with their relentless style of play.

The Royals and Cardinals ranked dead last in their respective leagues in home runs, and now, they find themselves 4 games away from a trip to the World Series. The first time that has ever happened. Cinderella teams like the Royals are awesome to root for because you can sense that their is something magical happening with them. This is the first that the Royals have made the ALCS since 1985. Two additional magical feats they accomplished, the Royals became the first team to win three consecutive extra inning games in MLB postseason history and have two of those consecutive wins come via home run in extra innings also a first in baseball history.

The Royals play small ball, they get hit and steal bases. They led the majors with 153 stolen bases. The Royals were the first team to steal six bases while trailing in a game and they also were the first team to steal four bases in one inning. Stealing bases is what they do. They steal bases and they are great at it! They don’t hit home runs or walk very much but that is changing in the postseason, which is why the saying goes “you can’t script October”. No one would have thought the Kansas City Royals would be in this position. That’s the thing about baseball it’s not always the best teams that but the team that gets hot at the right time. It doesn’t hurt when it looks like fate is helping you out.

6 thoughts on “Root For Cinderella”