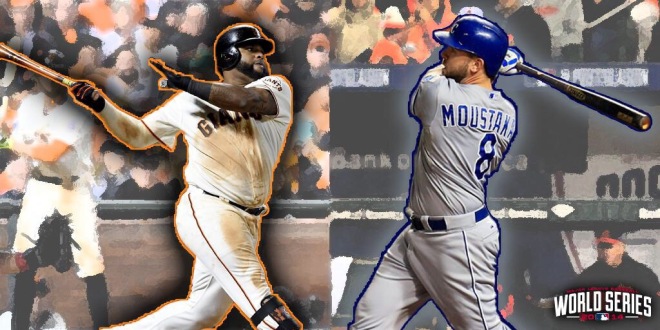 The World Series is all set. It will feature the San Francisco Giants versus the Kansas City Royals. It’s Dynasty versus Destiny in the 2014 World Series.

This World Series will feature two wild card teams for the first time since 2002 when the Angels defeated the Giants. This matchup will also be the first between two teams that failed to win 90 games in the regular season.

The path to the World Series is nearly identical for both teams. Both the Royals and Giants had to win the wild card playoff game in order to make it to the LDS. Once in the LDS they both had to defeat the team with the best record in their respective league. And they followed up their performance in the LDS by making quick work in the LCS.

The Giants are in the World Series for the third time in five years. Another World Series championship will definitely cement this Giants team as a dynasty. The Giants always find a way to win and get the job done. They’ve been able to get contribution from everyone on the team. The way they punched their ticket to World Series exemplifies that’s fact.

For example, Travis Ishikawa hit a three run walk off home run to send the Giants to the World Series. When you watch that home run you can’t help but think of Bobby Thompson home run “The Shot Heard around the World” in 1951 and the immortal words “the Giants win the pennant! The Giants win the pennant.” The crazy thing about the Giants making the World Series yet again is shocking when you sit back and think about it. When you saw the gem that Bumgarner pitched against the Pirates you had to be thinking in the back of your mind “oh no here come those Giants again.” You just had to; or was I the only one? And with the best catcher in all of baseball in Buster Posey leading the way, the Giants should be the favorites to win the World Series.

Now the Royals seem to have destiny on their side right now. The Royals are a perfect 8-0 in this postseason thus far. Every time you watch the Royals during their playoff run you get the feeling that something magical is going to happen for their benefit and it has thus far. The Royals have made remarkable plays game after game. The world is now taking notice of the potential all-star in Lorenzo Cain. Their bullpen has been nothing short of outstanding since the ALDS. Their bullpen will be entering the World Series with a .096 era. The Royals have also won four one-run games in this postseason which basically means that the bullpen has given the team a chance to win every game and you can’t win the World Series without a bullpen. Oh yea, one more thing, the Royals are fast if you didn’t know. They manufacture runs by getting guys on base and stealing bases. It’ll be fun watching them try to run on Buster Posey. The Royals are the hottest team and they embody the Cinderella persona. Royals are just four wins away from completing their fairytale story.

I believe that we are in for an entertaining World Series between the San Francisco Giants and the Kansas City Royals. Will the Giants cement themselves as a dynasty or will destiny prevail with the Royals? We will soon have the answers to that question. It’s Dynasty vs Destiny.

6 thoughts on “Dynasty vs Destiny”