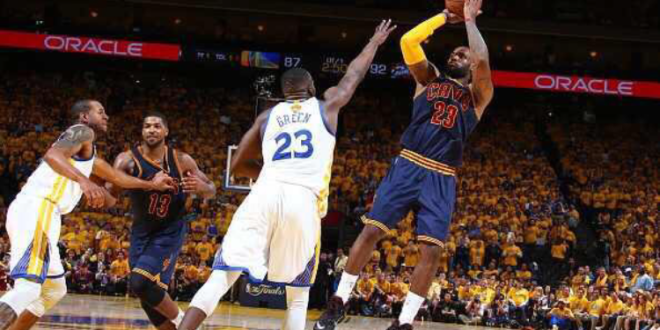 We see you, LeBron.
You don’t have to be his biggest fan or his fan at all but you must respect what LeBron James is doing thus far in the NBA Finals. Sure, it’s only been two games but we have been witnesses to greatness while watching LeBron in games 1 and 2. Of course, talking heads will nitpick and criticize his game. Everyone will point to his bad shooting percentage, his high usage rate and how he’s been inefficient. And they may have valid points, but they are letting facts get in the way of a great story, LeBron James is unbelievable! Describing LeBron as great is an injustice, after witnessing the performances he has had in the 2015 NBA Finals.
As everyone now knows, LeBron James is the only current Cleveland Cavalier who was part of the team to start the season. LeBron has lost his two all-star teammates, causing him to trust in JR Smith. Are you kidding me? His starting point guard is now Matthew Dellavedova, unknown until this season who is logging critical minutes in the Finals. You know the Cavs aren’t a deep team when only three players score in the second half and overtime in Game 1. Two of those players are LeBron James and Kyrie Irving. The third player is none other than Timofey Mozgov. Winning a game in Oracle with the supporting casts that LeBron has with him is nothing short than miraculous. When you consider that the Golden State Warriors have been the best team in the league and have only lost 3 games at home all season including the playoffs.

The LeBron we are watching in these NBA Finals is a player that knows and is carrying himself as not only the best player in the world but also with the belief that can’t no one can stop him. You knew this would be a different animal from the start in Game 1 when you can see LeBron demand the ball every single time and take it to the Warriors. I loved seeing this LeBron James who dismantled whoever was trying to guard him to the post. It hard to remember the days when people would criticize LeBron for not having a post game because now in the 2015 Finals, he was living in the post.
LeBron’s numbers are insane, he is averaging 41.5 points, 12 rebounds and 8.5 assists through the first two games and playing basically every single minute. LeBron is simply a beast! You can only watch in amazement to what LeBron is doing by carrying this Cavs team. LeBron is at the peak of his power and it is been a pleasure to watch. So to the LeBron haters out, just take a second before these Finals are over to appreciate what you are watching.
LeBron just brought the city of Cleveland their first Finals game victory in their history. And LeBron had to earn that win by giving everything he had. This is why you have to love the raw emotion LeBron showed after winning Game 2. 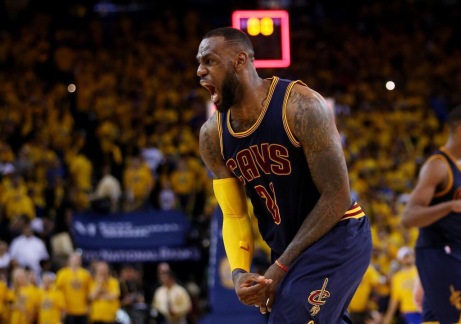 LeBron in these Finals has embodied the last lines in the letter he wrote to declare he was coming back to Cleveland:

“In Northeast Ohio, nothing is given. Everything is earned. You work for what you have. I’m ready to accept the challenge. I’m coming home.”