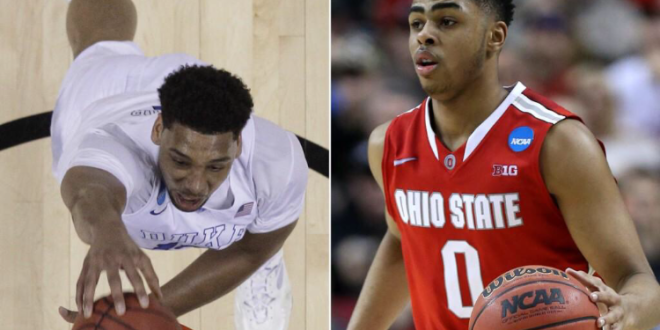 With the second pick in the 2015 NBA Draft, The Los Angeles Lakers select…

That’s the line that every Laker fan can’t wait to hear come June 25th. But which name Commissioner Adam Silver ill declare is the big question. With most experts having Karl-Anthony Towns going number one, that leaves the Lakers with their choice of either Jahlil Okafor and D’Angelo Russell.

With the second pick, the Lakers now have options, which means now there is the chance the can overthink things and over analyze. So although the Lakers won the Draft Lottery by getting the second pick they also complicated some things. Had the Lakers stayed at the 4th pick things would’ve been more simple; they just pick the best available whether it be D’Angelo Russell, Emmanuel Mudiay, Justin Winslow or Kristaps Prozingis. They wouldn’t have to many options at 4 but with the second pick everything is up for grabs.

D’Angelo Russell’s draft stock has risen at the right time for this draft. Russell seems to be the most ready PG in this draft. The Lakers would be crazy not to draft a PG in a PG driven league where practically every contending team has a legit PG, especially in the Western Conference. Every night you’ll face an all-star caliber PG. What do the Lakers have to combat that? Jeremy Lin? No offense to Lin, but that isn’t going to cut it in the West. With Russell, the Lakers will have their PG of the future and have Clarkson as a combo guard. That would be a nice young backcourt. Russell is a better shooter than Mudiay, Russell isn’t a project, he is NBA ready. His skill set is perfect for the NBA.

The great Bill Simmons says you want your point guard to be able to shoot 3’s or be able to attack the rim. Russell does both, albeit not being the most athletic in the draft.

Russell’s game is a perfect fit for the Lakers because he can run a pick and roll offense to perfection. Russell is a pass first point guard that can shoot when need be. He will be able to make his teammates better right off the bat by using his high basketball IQ to make the right decisions. Russell will also be able to reserve some energy for an aging Kobe Bryant.

Russell’s game will also be a perfect fit with Julius Randle who is returning this year after missing all of last season due to a leg injury. If you are looking for another reason to love Russell besides his shooting ability, great vision, it would have to be his confidence or as the kids say, his “swagger”. Russell has recently proclaimed himself the best player in the draft. You love players who have that confidence and chip on their shoulders. Russell’s silky smooth game will be received well in a city that hasn’t has a great point guard since Magic Johnson. D’Angelo Russell can be the next face of the Lakers.

Now if I may quote Robert De Niro from “Heat” “there’s a flip side to that coin” and his name is Jahlil Okafor. Okafor is arguably the most NBA ready player in this draft class. It seems as if everyone has forgotten that Okafor was projected as the one number pick in the draft for most of the college season. Okafor is the real deal, he won’t be a bust. He has the hands and soft touch you want from your big man along with the footwork that would help make him a beast in post. His game will transition nicely at the NBA level. Okafor was the best player for Duke and he helped lead them to a NCAA title. Okafor is a sure bet to average at least 17 points and 7 rebounds as rookie.

You can’t teach height nor the feel for the game that Okafor has. He is a good passer outside of the post and double teams. Plus, talented big men are what the Lakers are known for, it’s their bread and butter. If you want to be a great big man look no further than the Lakers. Okafor and Randle would be a great young front court for the Lakers going forward. People say his defense is shaky, but you can teach a player how to play defense. You can show him tape of Luis Scola’s versatility as the Pacers do with their players. Lakers shouldn’t worry about his defense when Okafor is in the NBA he will be able to hold his own. On the offensive end, he will be. A nightmare for the opposing teams. There is only a handful of centers that will be abel to matchup with Okafor in the middle. Entering almost every game the Lakers will always have an advantage inside because of Okafor’s skill set.

Okafor offensive game is unbelievable and most centers in the NBA don’t have the moves he has, even at the age of nineteen. Okafor could easily be a double-double machine for his career. When you see Okafor and hear him talk about his upbringing and his love for the game you know he wants to be one of the greats. You don’t have to worry or question his motor, Okafor will bring it every game on both ends of the floor.

So who should the Lakers draft with the second pick in the draft? The answer is Jahlil Okafor. Sure having a point guard will be nice and yes it’s a point guard driven league. But point guards are a dime a dozen.

A big man that can dominate in post and open things up for others is not. Okafor wasn’t the best player in college basketball for no reason. Okafor can ball and the Lakers should not over think this decision. Adding Okafor to their young core of Randle and Clarkson is the smart move for the Lakers. Okafor will help make the Lakers look a bit more attractive. Okafor will make the Lakers a better team next year and for years to come.